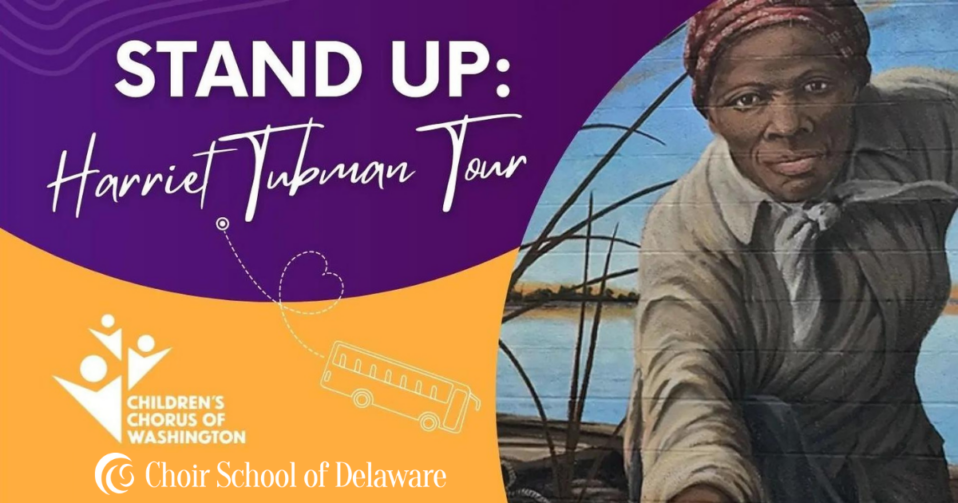 This concert is free and open to the public. Advance registration is requested.

The Stand Up: Harriet Tubman Tour commemorates the 200th anniversary of Harriet Tubman’s birth. Starting in Washington DC, the combined chorus will follow the path of the Underground Railroad through Cambridge, MD; Wilmington, DE; Philadelphia, PA; and complete their journey in Easton, PA.

In addition to performing at three venues, tour participants will learn from local historians and visit sites that played a role in the Underground Railroad and Harriet Tubman’s journey to freedom. They will connect songs to physical landmarks and engage in dialogue about Harriet Tubman’s legacy and its continued impact, connecting the past and present through music. Educational tour stops will include the National Museum of African American History & Culture in Washington DC, the Harriet Tubman Museum and Mural in Cambridge, MD, and the Harriet Tubman Underground Railroad National Park.

This tour will be a powerful opportunity to educate, collaborate, and affect lasting change through music and the arts.

Do you love to applaud our students?

Join the Choir School mailing list and be the first to learn about news and upcoming performances and community events.

You have Successfully Subscribed!

Register for Event: Stand Up Tour Concert in Easton, PA

Make sure to copy Registration number after successful submission.

Thank you for payment.

The Choir School of Delaware is a registered 501(c)(3) organization serving at-risk students from the greater Wilmington area through music and mentoring.

Your ticket for the: Stand Up Tour Concert in Easton, PA